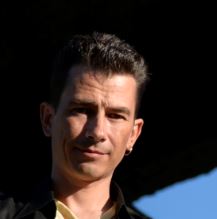 Kim B. Sommer has chosen to leave deZeption the 15th. of Oktober 2017.

We want to thank Kim, for his hard work and dedication throughout the years. He’ll be missed, but not forgotten.

I started playing the drums in the early 80’s when I was about 9 years old and continued this, until I was about 17.

In the early 90’s, I was playing as a DJ in a mobile discotheque and did this for a couple of years. In this period, I got my hands on a keyboard in some kind of a strange way.

After a few of years, I was invited to join a synthpop/ electropop band called Opera Four and that was my start into electronic music. Joining this band, really caught my curiosity for synths, samplers, drum machines etc. and I did a lot of buying and selling miscellaneous equipment in this period.

Opera Four ceased after a couple of years, only releasing an unofficial 10 track demo tape and playing a few live gigs.

In 2005, I met deZeption and at that time, the band was seeking a keyboard player for a live gig and I was invited…. the rest is history as described on this web page.