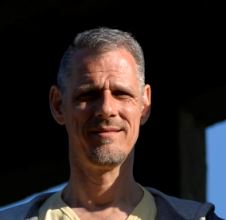 Henning Wibrand and deZeption has chosen to stop there cooperation the 10th. of October 2019.

I want to thank Henning, for his hard work and dedication throughout the years. He’ll be missed, but not forgotten.

I have been into music from the age of 7. My fist instrument was a beautiful wooden recorder from Hohner. It was a birthday wish granted by my grandma. I was so inspired by the American Indian Tribal music in my mom’s record collection, where the flute had the leading role. I quickly learned to master the instrument to be able to copy El-Condor Pasa or Roger Whitaker to such an extent, that I impressed my parents, grandparents, and their friends and family. Including my music teacher at school, who recommended that I started taking lessons. At the school Christmas Concert this first year, I had my glorious debut as a performing artist. It was an immense success and it shed a bright and proud light on my mom. I was hooked. Few years later came the electric guitar and my brother got a bass guitar – and so we had a band. From the very beginning, I started to compose my own music. In my early teens, I started adding lyrics and I realized I had an urge to tell stories through my music.

When I first heard the song Popcorn by Gershon Kingsly, I was baffled by the sound and for years I thought it was played on a guitar, until my local instrument-pusher showed me a synthesizer. This was a turning point in my perception of music. My brother and I immediately sold our guitars to buy a Roland SH02 synth. The novel sound opened a completely new world to us. Soon after, I became a lead singer in one of the very first Danish new age bands.

After winning a music contest but unable to break a record deal, the band resolved and I started a new project band NUANCE, with my brother and the drummer Johnny from the former band. This time we aimed for something between Depeche Mode and Ultravox and formed one of the three first purely electronic bands on the Danish scene. During that time, my brother and I invested heavily in one synthesizer after another. The flagship in our setup was a Roland MC4 step sequencer. The synths we could afford were monophonic, so we stacked one upon the other to get a super fat bass. Our drummer sold his Perl set and bought a set of electronic Simmons drums and a Roland TR808. The sound was amazing and we had a few but very successful and even spectacular concerts and won a couple of local music contests. Some years later, I had a call from the bass player Henrik, who asked if I could do some top-lines on a project of his. The collaboration was an instant success with a great unique indie sound and we put together a band named ToOldToo and had quite a number of successful concerts around Denmark and abroad over a tree years period. However, we never managed to close a record deal and eventually the band broke up.

In this collaboration, I had really honed my skills as a topline writer and gained a lot of experience as a lead singer. After that my brother Bjarne and my friend Johnny (the drummer) formed a commercial dance band called AMB with a couple of other guys and played popular contemporary music on various clubs, restaurants and private parties over the next five years, culminating in a 3 seconds of fame live-transmission worldwide new year’s evening Y2K.

This year my brother and I started an IT company. It was time consuming so we had to put the band music aside. I carried on writing new music in my sparse spare time. I invested in a pc based home-recording studio and started producing my own music. In the following years songwriting, composing and producing was my thing and I started co-writing with people from all over Scandinavia and participation in writer camps and song contests. In 2008 I was in the semifinals in the World Song Contest and in 2010, I won a local song contest, writing a folk hymn for the gardeners and landscape architects union.