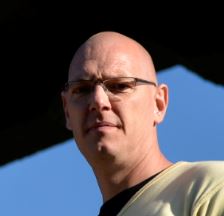 Music has always been a big part of my life, but Depeche Mode’s debut album “Speak and Spell” was a turning point for me, as they introduced me to the sounds of the synthesizer.

I began to play keyboard/synthesizers myself in the beginning of the 80’s. My first synthesizer was a monophonic Roland SH-101. Instantly I realized that I was missing the opportunity to make chords and as soon as I had saved up enough money, I went out and bought myself a Korg Poly 800. Wow… I had entered a whole new world and new idea’s was created. The next issue I had to face, was not having enough keys to play. The Roland Juno-106 synthesizer solved that problem for me. Finally a synthesizer that could fulfill my needs.

But making music on my own, didn’t give me the satisfaction I wanted. I needed to work with others. So, in 1985, I formed my first band TJARM, with my old school buddy Morten Jönsson. TJARM ceased in 1989, only releasing an unofficial 8 track demo tape and one live gig in the local community.

A short while after TJARM ceased all my synthesizers where stolen and in 1990 I bought my first computer, which simplified the process of making music. I began to make music on my own, but due to life and other circumstances, the music was put on a hold for more than a decade.

In the summer of 2002 I meet Claus L. Hansen and this meeting inspired me to start making music again. Claus produced music in a digital audio workstation (DAW) called Tracktion and used VST’s. Claus and I instantly connected and as we shared the same passion for electronic music, we decieded to team up and see where our ideas would take us….. And before we knew it, deZeption was formed in May 2003.

You can read more about the history of deZeption here.